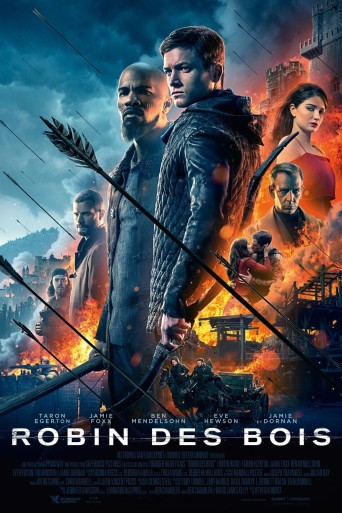 Robin Hood is a 2018 American action-adventure film directed by Otto Bathurst and written by Ben Chandler and David James Kelly, from a story by Chandler. It is a quasi-contemporary retelling of the Robin Hood legend, and follows his training by John to steal from the Sheriff of Nottingham. The film stars Taron Egerton, Jamie Foxx, Ben Mendelsohn, Eve Hewson, Tim Minchin and Jamie Dornan. Returning home to England to learn corrupt Sheriff of Nottingham has seized his family estate, aristocrat Robin of Loxley joins forces with Friar Tuck and Little John -- a fierce Arabian warrior who wants to put an end to the Crusades. Armed with arrows and dubbed Robin Hood, Loxley leads a band of oppressed rebels in a daring plan to rob the Sheriff of his money and take away his power. The film was announced in February 2015, with Egerton signing on as the lead role that September. Hewson, Foxx and Mendelsohn all joined the cast over the following year, and principal photography began in February 2017, lasting through May.